Mechanism of action and resistance

Sofosbuvir is a pyrimidine nucleotide analogue (Fig. 1) that inhibits HCV NS5B RNA-dependent RNA polymerase, which is essential for viral replication[11, 12], Sofosbuvir is a prodrug that undergoes intracellular metabolism in human hepatocytes to a pharmacologically active uridine triphosphate form (GS-461203)[11-14]. GS-461203 is incorporated into HCV RNA by NS5B polymerase where it acts as a chain terminator[11, 12]. In vitro, the GS-461203 concentration leading to 50 % inhibition of the polymerase activity of recombinant NS5B from HCV genotype 1b, 2a, 3a and 4a ranged from 0.7 to 2.6 micromolar per liter. A rapid rate of viral decline was seen with Sofosbuvir[20]. It was estimated that 99 and 99.9 % of final effectiveness would be reached in a mean 0.8 and 2 days, respectively[20]. HCV RNA levels declined in a biphasic manner[20].
Sofosbuvir has a high genetic barrier to resistance[15]. Studies have found that resistance-associated variants (including the primary sofosbuvir resistance mutation in NS5B, S282T) were not detected in any patient receiving sofosbuvir in combination with ribavirin with or without peginterferon-alpha[15, 16]. However, the S282T resistance mutation was detected in one patient with HCV genotype 2b infection who received sofosbuvir monotherapy. Although L159F and V321A substitutions were detected in some patients with HCV genotype 3a infection who received sofosbuvir-containing regimens in phase III trials, these substitutions were not associated with changes in phenotypic susceptibility of sofosbuvir[12]. In patients with HCV genotype 1a or 2b infection and HCC who received sofosbuvir and ribavirin for up to 48 weeks while awaiting liver transplantation, the L159F substitution emerged in multiple patients who experienced virological failure (breakthrough and relapse)[12]. The presence of L159F and/or C316N substitutions at baseline was also associated with post-transplant virological breakthrough and relapse in multiple patients with HCV genotype 1b infection[12].
HCV replicons expressing the S282T resistance mutation showed low level resistance to sofosbuvir, but retained susceptibility to ribavirin and other classes of direct-acting antivirals, including NS5A inhibitors[17]. Sofosbuvir retained full activity against the nucleoside inhibitor resistance-associated variants L159F and L320F, the ribavirin resistance-associated variants T390I and F415Y, and against clinically relevant protease inhibitor, non-nucleoside inhibitor and NS5A inhibitor resistance-associated variants[18, 19]

GS-331007 is the predominant circulating metabolite of sofosbuvir and accounts for 90 % of systemic exposure, with sofosbuvir accounting for & 4 %[12].
Sofosbuvir was rapidly absorbed following oral administration, with maximum plasma concentrations (Cmax) of sofosbuvir and GS-331007 achieved at ~ 0.5–2 h and 2–4 h post-dose, respectively[11, 12]. In patients with HCV genotype 1–6 infection who received sofosbuvir plus ribavirin with or without peginterferon-alpha, the steady-state geometric mean area under the plasma concentration-time curve (AUC) from time zero to 24 h (AUC24) for sofosbuvir and GS-331007 was 828 and 6,790 ng * h/mL, respectively[12]. The mean sofosbuvir AUC was 36 % higher and the mean GS-331007 AUC was 39 % lower in patients with chronic HCV infection than in healthy volunteers[21].
The rate of sofosbuvir absorption was slowed and the extent of absorption was increased & 1.8-fold when sofosbuvir was administered with a high-fat meal, rather than in the fasting state; GS-331007 exposure was not altered[11]. The US prescribing information states that sofosbuvir may be administered without regard to food[12], whereas the EU SPC states that sofosbuvir should be administered with food[11].
Sofosbuvir was ~ 61–65 % bound to human plasma proteins, whereas plasma protein binding of GS-331007 was minimal[12].
Sofosbuvir undergoes extensive hepatic metabolism to a pharmacologically active uridine triphosphate form (GS-461203)[11-13]. Dephosphorylation results in the formation of GS-331007, which did not show anti-HCV activity in vitro[11, 12].
Renal clearance is the major elimination pathway for GS-331007[11, 12]. Following administration of a single radiolabelled dose of sofosbuvir 400 mg, ~80 and 14 % of the radioactivity was recovered in the urine and faeces, respectively[11, 12].
Sofosbuvir had a median terminal elimination half-life (t_1/2) of 0.4 h and GS-331007 had a t_1/2 of 27 h[11, 12].
Sofosbuvir is a substrate of P-glycoprotein (P-gp) and breast cancer resistance protein (BCRP), although GS331007 is not[11, 12]. Thus, it is expected that sofosbuvir concentrations may be reduced by coadministration of sofosbuvir and potent intestinal P-gp inducers[11, 12]. Given this, the EU SPC states that sofosbuvir should not be coadministered with the potent intestinal P-gp inducers carbamazepine, phenytoin, phenobarbital, oxcarbazepine, rifampicin or Hypericum perforatum (St John’s wort)[11]. In addition, coadministration of sofosbuvir and rifabutin or rifapentine is not recommended[11]. The US prescribing information states that rifampicin and H. perforatum should not be used with sofosbuvir, and that coadministration of sofosbuvir and carbamazepine, phenytoin, phenobarbital, oxcarbazepine, rifabutin or rifapentine is not recommended[12].

Oral sofosbuvir was generally well tolerated in patients with chronic hepatitis C. The most commonly reported adverse events and laboratory abnormalities in patients receiving sofosbuvir plus ribavirin with or without peginterferon-alpha were consistent with those expected in patients receiving treatment with ribavirin and peginterferon-alpha, and co-administering sofosbuvir did not appear to increase the frequency or severity of these adverse events or laboratory abnormalities.

Sofosbuvir is a drug used for the treatment of hepatitis C. It is recommended to be used in combination with other drugs (such as velpatasvir) for the first-line treatment for HCV genotypes 1, 2, 3, 4, 5, and 6. It takes effect through acting as a nucleotide analog inhibitor, being capable of specially inhibiting the HCV NS5B (non-structural protein 5B) RNA-dependent RNA polymerase.

PSI-7977 is a prodrug that is metabolized to the active antiviral agent 2''-deoxy-2''-α-fluoro-β-C-methyluridine-5''-monophosphate and is currently being investigated in phase 3 clinical trials for the treatment of hepatitis C. Studies have profiled PSI-7977 as a nucleotide inhibitor of hepatitis C virus, exerting selective inhibitory effects towards HCV NS5B polymerase.

PSI-7977 is a phosphoramidate prodrug of PSI-7851, a nucleoside analog that, when phosphorylated, inhibits the RNA-dependent RNA polymerase of hepatitis C virus (EC50 = 92 nM). PSI-7977 is effective in vitro and in vivo.[Cayman Chemical]

PSI-7977 is a prodrug that is metabolized to the active antiviral agent 2'-deoxy-2'-α-fluoro-β-C-methyluridine-5'-monophosphate and is currently being investigated in phase 3 clinical trials for the t reatment of hepatitis C. Studies have profiled PSI-7977 as a nucleotide inhibitor of hepatitis C virus, exerting selective inhibitory effects towards HCV NS5B polymerase.

ChEBI: A nucleotide conjugate that is used in combination with ledipasvir (under the trade name Harvoni) for the treatment of chronic hepatitis C genotype 1 infection.

In December 2013, sofosbuvir (also known as GS-7977 and PSI-7977) was approved in the United States for the treatment of hepatitis C virus (HCV) infection as a component of a combination antiviral treatment regimen. Sofosbuvir was discovered from an effort to enhance the activity of the parent nucleoside by bypassing rate-limiting monophosphorylation with a prodrug that would liberate the intactmonophosphate in the liver, where it would then be converted by cellular kinases to the active triphosphate species. In addition, the prodrug was designed to be amenable to oral delivery. In the initial synthesis of sofosbuvir, the iso-propyl ester of (L)-alanine was coupled with phenyl dichlorophosphate to provide a diastereomeric intermediate that was coupled with the uridine nucleoside. The diastereomeric mixture (GS-9851) was shown to produce high levels of triphosphate in vitro in primary hepatocytes and in the livers of rats, dogs, and monkeys after oral dosing. The individual diastereomers were obtained by chromatography or by crystallization. The diastereomer with the Sp configuration at the phosphorous center (sofosbuvir) was found to be >10-fold more potent in an HCV replicon assay than the corresponding Rp diastereomer (EC90s of 0.42 and 7.5 μM, respectively).

The enantiopure unsaturated ester 166, which readily arises from olefination of the commercially-available aldehyde 165, was subjected to ethylene glycol-promoted permanganate dihydroxylation conditions to afford diol 167 in 60% yield over the two steps. A three-step sequence was then employed to generate lactone 169. Diol 167 was converted to the cyclic sulfite and then oxidized with bleach to give the corresponding cyclic sulfate. Treatment with nucleophilic fluorine gave intermediate ammonium sulfonate 168, which, upon acidic hydrolysis of both the acetonide and sulfonate, underwent cyclization to give lactone 169. Next, bis-protection of diol 169 furnished 170 in 71% yield for the four-step sequence. Reduction and chlorination through the use of Red-Al ® and sulfuryl chloride, respectively, constructed chlorotetrahydrofuran 171, which was subsequently reacted with commercial N-(2-oxo-1,2-dihydropyrimidin-4-yl)benzamide 172 in the presence of base and Lewis acid to afford 173 in 57% yield over the two steps. Treatment of 173 with AcOH and then ammonia in MeOH removed all benzoyl protection to give rise to diol 174 in 78% yield. Finally, treatment of 174 with pentafluorophenolic phosphonate ester 175 and tert-butylmagnesium chloride generated sofosbuvir (XXII) in 68% yield. The final step proceeds with excellent chirality transfer from 175 (99.7% ee). Notably, the preparation of the key phosphonate fragment was achieved in a simple two-step sequence beginning with alanine isopropyl ester 176. Phosphorylation in the presence of base at cryogenic temperatures, followed by treatment with pentafluorophenol, delivered scale quantities of 176 in 34% isolated yield and high enantiopurity (>98% ee) after recrystallization. 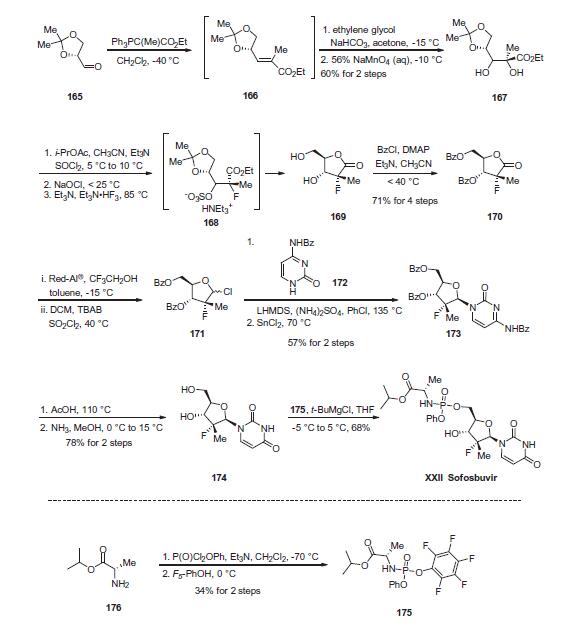 Sofosbuvir is a nucleotide prodrug that is extensively metabolised. The active metabolite is formed in hepatocytes and not observed in plasma. The predominant (>90%) metabolite, GS-331007, is inactive. It is formed through sequential and parallel pathways to the formation of active metabolite. The metabolic pathway involves sequential hydrolysis of the carboxyl ester moiety catalysed by human cathepsin A or carboxylesterase 1 and phosphoramidate cleavage by histidine triad nucleotide binding protein followed by phosphorylation by the pyrimidine nucleotide biosynthesis pathway.
Dephosphorylation results in the formation of nucleoside metabolite GS-331007 that cannot be efficiently rephosphorylated and lacks anti-HCV activity in vitro. Following a single 400 mg oral dose of [14C]-sofosbuvir, mean total recovery of the dose was >92%, consisting of approximately 80%, 14%, and 2.5% recovered in urine, faeces, and expired air, respectively. This data indicate that renal clearance is the major elimination pathway for GS-331007 with a large part actively secreted.